If you’re looking for a Bible recognized by the Baptist Church, Baptist Bible app is perfect for you!

Baptist is one of the largest denominations of Christian Protestantism. As indicated by their name, the primary Baptist distinctive is their practice of believer’s baptism. Today there are about 43 million Baptists worldwide. 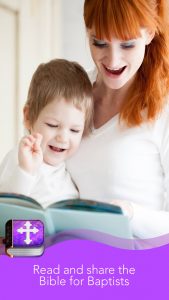 The baptist Church has its origin in the XVI century. They apparently emerged out of the Puritan-Separatist movement in the Church of England.
Baptists originated in England in a time of intense religious reform. They proclaimed the faith of the New Testament as first given by Jesus and his apostles. Since then they have spread their teachings and churches in many lands and many cultures.

They have had a higher growth in the Unites States, where they are the majority Protestant branch, with approximately 33 million of followers.